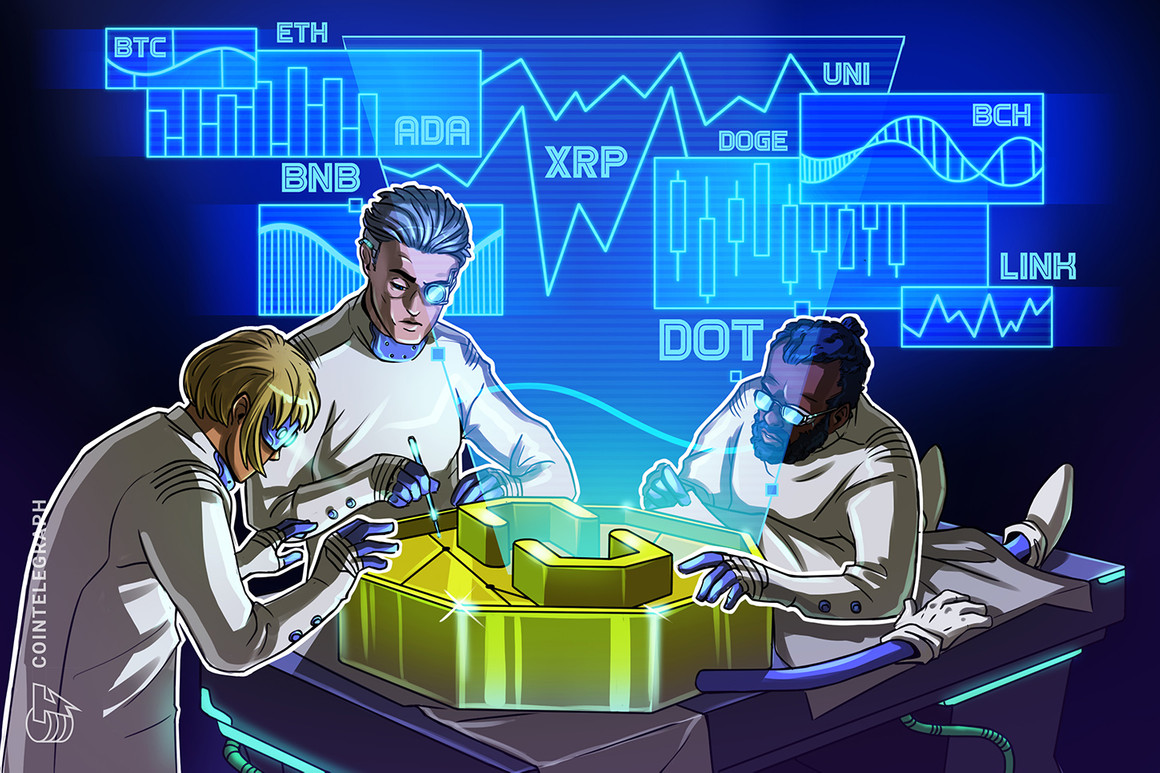 Bitcoin’s (BTC) recovery from $29,482.61 on July 21 has continued to surpass one resistance after another. Today, Bitcoin has risen above the 200-day simple moving average, an indicator watched by institutional investors to determine whether the asset is bullish or bearish.

A positive sign about today’s rally has been that Bitcoin was not affected by the flash crash in gold, which momentarily dipped to a four-month low. This suggests that traders are focusing on the fundamentals of the sector and are not affected by the performance of other asset classes.

Glassnode noted that investors holding Bitcoin for more than a year have not dumped their positions after the recent rally to $45,000. This is in contrast to the 2018 bear market “where old hands took exit liquidity on most relief rallies.”

Will Bitcoin enter a bull phase and pull the sector higher? Let’s study the charts of the top-10 cryptocurrencies to find out.

The pair could then rally to the overhead resistance zone at $50,000 to $51,500 where the bears may mount a stiff resistance.

If the price turns down from this zone but stays above the 200-day SMA, it will increase the possibility of the continuation of the up-move. A break above $51,500 could clear the path for a rally to $60,000.

This bullish move will invalidate in the short term if the price turns down and breaks below the breakout level at $42,451.67. The pair could then drop to the next support at $36,670.

Ether (ETH) surged above the psychological level at $3,000 on Aug. 7, which suggests that the correction could be over. The bears tried to trap the aggressive bulls by pulling the price back below $3,000 but the buyers held their ground.

The bulls will now try to resume the uptrend and push the price to $3,500 and then to the psychological resistance at $4,000. However, the sharp rally of the past few days has pushed the relative strength index (RSI) into the overbought territory.

This suggests that the rally is overheated in the short term and a consolidation or correction is possible. The first sign of weakness will be a break and close below $2,893.23. That could result in a decline to $2,500.

Binance Coin (BNB) broke and closed above the $340 resistance on Aug. 6, which completed a bullish ascending triangle pattern. The bears tried to pull the price back below the breakout level but the altcoin bounced off the 200-day SMA ($328) today. This suggests that bulls are buying on dips.

The BNB/USDT pair could now start its march toward the overhead resistance at $433. The bears are again likely to mount a strong defense of this level.

If the price turns down from it, the pair could drop to $340 and remain range-bound for a few days. A breakdown and close below the 50-day SMA ($308) could tilt the advantage in favor of the bears.

On the other hand, a breakout and close above $433 will suggest that the correction is over. The pair may then attempt to start a new uptrend that could reach $520.

Cardano (ADA) turned down from $1.50 on Aug. 8 but the bulls are in no mood to relent. They purchased the dip and are currently attempting to push the price back above the overhead resistance.

If buyers propel the price above $1.50, the ADA/USDT pair could start its northward march toward the overhead resistance at $1.94. This level may act as a stiff resistance but if the bulls do not give up much ground, the pair could resume its up-move.

XRP soared above the $0.75 resistance and the 200-day SMA ($0.79) on Aug. 7, which completed a double bottom pattern. The price rebounded off the breakout level today, indicating that bulls have flipped the level to support.

If buyers push the price above $0.84, the XRP/USDT pair could start its journey toward the overhead resistance zone at $1 to $1.07. A breakout and close above this zone could signal the start of a new uptrend.

Alternatively, if the price turns down from the overhead resistance, the pair could drop to the 200-day SMA. A bounce off this support could keep the pair stuck between $1.07 and $0.75 for a few days. The bears will have to pull the price below the 50-day SMA ($0.65) to gain the upper hand.

Dogecoin’s (DOGE) consolidation near the overhead resistance at $0.21 resolved to the upside on Aug. 7 as bulls established their supremacy. The bears posed a stiff challenge at $0.29 on Aug. 8 but the positive sign is that the bulls did not allow the price to break below $0.21.

The buyers will now make one more attempt to propel the price above $0.29. If that happens, the DOGE/USDT could rally to $0.35 where the bears may again mount a stiff resistance.

If bulls drive the price above the overhead resistance at $21, the DOT/USDT pair could start its journey to the next target objective at $26.50. The 200-day SMA ($27) is placed just above this resistance, hence the bears are likely to defend this level aggressively.

If the price turns down from this resistance, the pair could drop to $21. A strong bounce off this level will suggest that traders are buying on dips. Conversely, a break below $21 could pull the price down to the 50-day SMA ($15.46).

Uniswap (UNI) broke above the 200-day SMA ($25.81) on Aug. 6 and the bulls successfully defended the retest of the level on Aug. 8. This suggests that the 200-day SMA will now act as a support on future declines.

The buyers will now try to thrust the price above the overhead resistance at $30. If they manage to do that, it will suggest that the downtrend is over. The UNI/USDT pair could then start its journey to $37 and later to $44.

Contrary to this assumption, if the price turns down from $30, the pair could again drop to the 200-day SMA. A break below this support will suggest that the bulls may be losing their grip. The pair may then drop to $23.45.

Bitcoin Cash (BCH) broke above the $546.83 resistance on Aug. 6, which completed the double bottom pattern. The bulls have successfully held the breakout level for the past two days, which is a positive sign.

The BCH/USDT pair could now rise to the 200-day SMA ($639) where the bulls may again face a stiff resistance. A breakout and close above this level could clear the path for the pair to rally to the pattern target at $710.13.

Contrary to this assumption, if the price turns down from the 200-day SMA, the pair could oscillate between the moving averages for a few days. A break below the 50-day SMA ($493) could increase the likelihood of a decline to $450.

The bears attempted to pull Chainlink (LINK) back below the breakout level at $22.07 on Aug. 8 but failed. This suggests that the sentiment has turned positive and traders are buying on dips.

The bulls will now try to push the price to the overhead resistance at $26.48 where the bears may again mount a stiff resistance. If the price turns down from this level, the LINK/USDT pair could stay range-bound between $26.48 and $22.07 for a few days.

The race between Uniswap DEXs