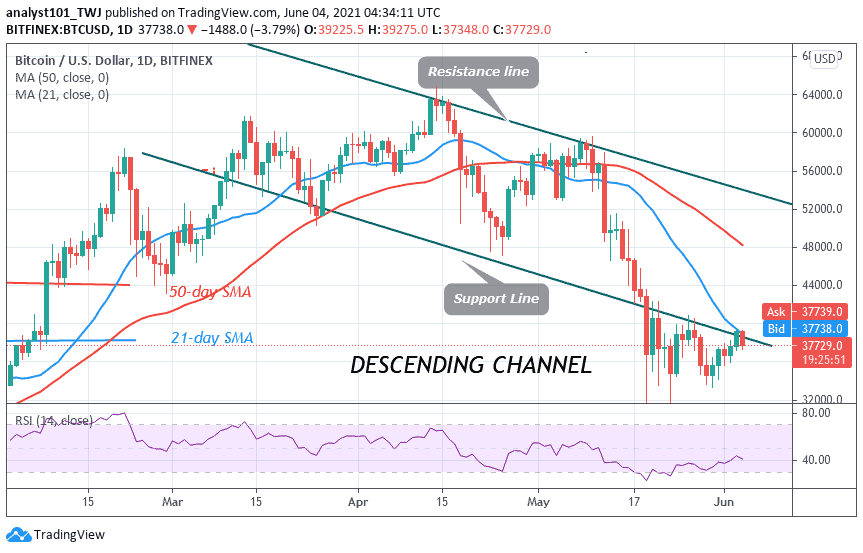 About 24 hours ago, Bitcoin bulls failed to sustain above the $40,000 as Bitcoin consolidates above $34,000. Consequently, BTC/USD is falling toward the direction of the lower price range. Since buyers fail to break the $40,000 resistance, sellers have another advantage to retest the critical support at $34,000. This has been the price tussle since May 19 downtrend. The breaking of these range-bound levels will determine the direction of Bitcoin.

For the past two weeks, Bitcoin has been confined in a tight price range between $34,000 and $40,000. Within the past weeks, buyers have made concerted efforts and retested the resistance zone on six occasions without success. The bears have made similar attempts to break the current support. It is unclear which direction Bitcoin will trend as bulls and bears continue price tussles. In a nutshell, if the bears break the $34,000 support, Bitcoin will fall to $30,000 low. Subsequently, the bearish momentum may extend to $20,000. On the other hand, if buyers break the $40,000 resistance, an initial rally to $46, 000 is likely. Later, the bullish momentum will extend to the $50,000 psychological price level.

Bitcoin Price Downtrend Is Not over, Says JP Morgan Strategist as Bitcoin consolidates above $34,000

Nikolaos Panigirtzoglou is the JPMorgan analyst who indicated that Bitcoin value may stand between $24,000 and $36,000. He said the largest cryptocurrency is likely to continue falling in the short term. Categorically, he asserted that weakened institutional demand is likely to drag the Bitcoin price below $30,000. Panigirtzoglou has indicated that institutional investors are reluctant to buy the dips after May 19 major crypto crash. He said: “We note that the mere rise in volatility, especially relative to gold, is an impediment to further institutional adoption as it reduces the attractiveness of digital gold vs. traditional gold in institutional portfolios”. The strategist believes in the $145,000 “theoretical target” for BTC’s price. He said: “The fair value for Bitcoin based on the current volatility ratio of Bitcoin to the gold of around x6 would be 1/6th of $145k or $24k. We thus see a fair value range of $24k to $36k over the medium term,”

Meanwhile, Bitcoin price is range bound between $34,000 and $40,000 since May 19. Bitcoin will resume up trending or down trending if the key price levels are broken. Incidentally, the king coin will continue its range-bound movement if key price levels remain unbroken. In the meantime, BTC’s price has continued its downward move.