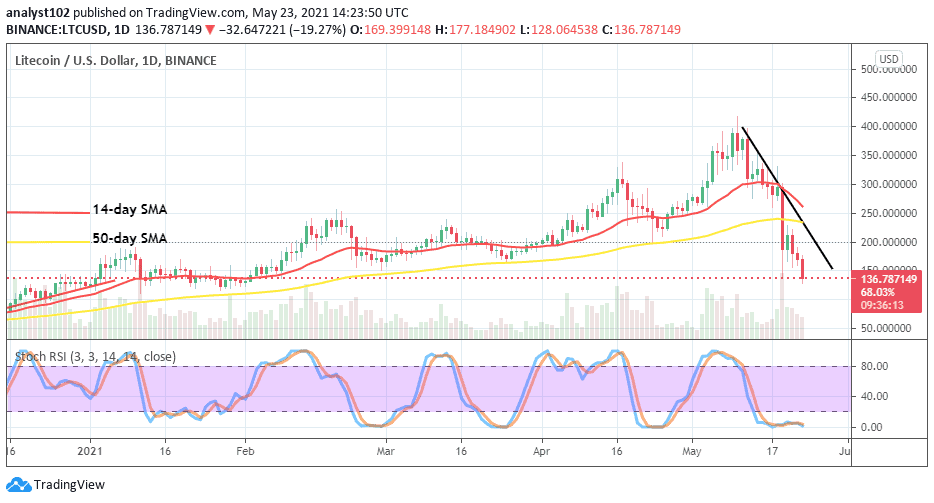 Litecoin Sells off Value – May 23
There has now being a continued heavy sell-offs in the market worth of Litecoin as paired with the US Dollar. The crypto value currently trades around the level of $139 with about a greater number loss of – 17.50%.

LTC/USD – Daily Chart
The LTC/USD daily chart shows that the value’s sell-off situation has been heightened forcing the bearish trend-line to draw downward to place at the $150 price level. And, that began playing out in the subsequent days’ operations after a major decline on May 19. The 50-day SMA trend-line has bent slightly to the south as the 14-day SMA indicator also briefly bent towards it from the top nearing the point of $250. The Stochastic Oscillators are with closed hairs consolidating in the oversold region to attest to the ongoing sell-off trading situation of Litecoin’s price as it is traded with the US Dollar.

Litecoin’s value sell-off, will it persist more under the bearish trendline?

So many sell-off trading situations have dominated the market operations between Litecoin and the US fiat currency. Once the bigger SMA indicator is intercepted by the smaller SMA from the top, the crypto will have to look for lower support underneath the level of $150. As of now, bulls are expected to muster up energy towards the lower support area of the $100 level.

The $150 market-level now appears to be the key determinant trading zone between seeing probable ups and sell-off continuation as indicated by the bearish trend-line. The current positioning of the SMAs on the chart indicates that bearish will still have the market dominance at the expense of bulls’ incapable pushes to make a formidable upswing against the level earlier mentioned.

In comparison, the daily chart shows that Bitcoin is gaining the advantage of the market over Litecoin’s continual sell-off values. The present pace of downward forces is on an increase to the extent that no reliable trading pattern has formed to suggest a near return of an uptrend in this crypto economy. The bearish trend-line has drawn southward across the SMAs. The 14-day SMA trend-line is over the 50-day SMA indicator. The Stochastic Oscillators have slantingly dipped into the oversold. At this point, the base may tend to relax a bit to possibly make a room for a range line of price moves.

Remember, all trading carries risk. Past performance is no guarantee of future results.